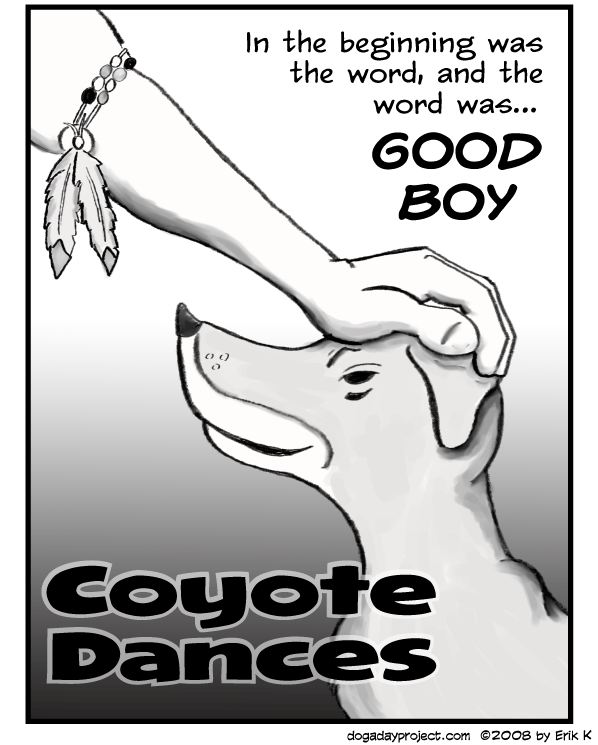 Coyotes are dogs, right? They can mate with domesticated dogs. They are in the Canis genus (canine, right?). They are technically Canis Latrans, but that translates to “barking dog.” I’m making the call, it’s acceptable.

Before 2000, I’d only heard of coyotes. But when Maggie and I camped at Monument Valley, we took a walk and came within touching distance of a yellow dog who trotted by. I suspected, but was only sure when we got to the visitor center and looked at pictures. It was a coyote. Cool.

I have a passion for folklore. One of my favorite characters is Coyote, the fire-bringer of Northwestern American mythology. He created human beings from (to put it politely) balls of dirt, then stole fire for them. He’s a complex and not entirely nice guy. I’ve wanted to work with his stories for a while. If only I drew faster, I’d have time for all of my ideas.

Anyway, this is is reworked page 1 from my 24 Hour Comic Day piece of a few years back. If you aren’t familiar, it’s a challenge to draw 24 pages of comics in 24 hours. Or die trying. Or something like that. I finished 11 pages of this one, which was still a major victory for me. I couldn’t feel my thumb for a week, because I was gripping my pencil too tightly. Today, I decided to rework the first page of this comic, in the hopes that it would inspire me to finish the story I started. I had fun, so it may actually happen. You’ll probably see another page from this next week.