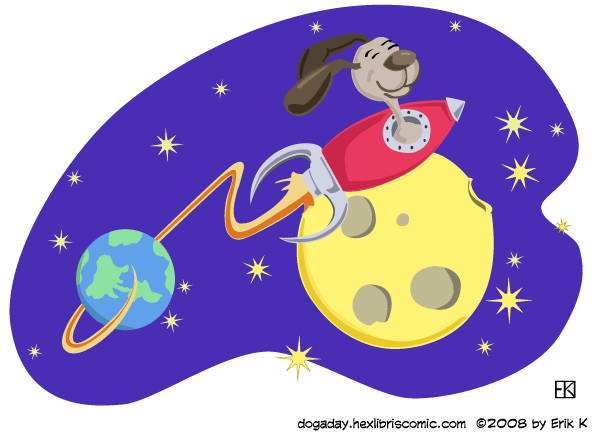 Well, I’m at the end of my visit to the 1950s, also known as Lenham, England. As Internet access there is spotty, and I don’t have a scanner with me, posting on the day isn’t feasible. In fact, I’m writing this on February 25, the day of my flight to Great Britain.

Since I’m drawing one, possibly two, dogs each day, I didn’t have enough brand-new dogs to cover the whole trip. I had to prepare all my images before my departure.  Some of the pieces from the past week have been new, some have been older pieces I like, and some have been reworks of older pieces. I will be drawing daily while there, that’s the point of this exercise, but it’s unlikely I’ll be able to actually post anything until I return tomorrow. (Darn that’s confusing, I mean tomorrow from when you’re reading this, not from when I’m writing. I bring you greetings from the past.)

This is the first Adobe Illustrator piece I did that I was proud of. I’m still proud of it. I used it on a business card, even. I worked on other versions of this piece for months before going to Illustrator. The strong graphical style fit the image, and my earlier airbrush and pastel attempts were weedy looking and unsatisfying. Success begat my long-running affair with vector graphics. Funnily, most drawings in this project haven’t been vector drawings (that means that your drawings use a mathematical formula rather than pixels, but I won’t bore you with a deeper explanation). I’ve been working in the very bitmapped world of Corel Painter and loving it more daily. Illustrator and I are still very close, though, and get together almost every day.

The inspiration for this piece was an idea for a short animation, part of which involved a dog’s fantasy of being abducted and taken to a world where dogs are worshipped. I want to do that animation someday, and Maggie and I have a partial script. If you don’t see it in the next year, I blame her.