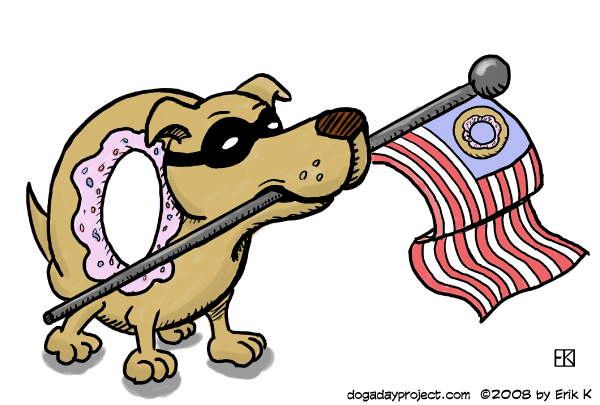 Yesterday, it turns out, was National Donut Day (or doughnut, whatever).  I found out too late. And if you didn’t know that apparently there were free Krispy Kremes to be had, please don’t hate me for informing you too late. However, you now have no excuse not to mark your calendar for next year. It’s the first Friday of June, and celebrates Salvation Army “Lassies” who distributed donuts to the troops. This has been going on since 1938, so it’s only taken me 70 years to find out about it.

We here at the Dog a Day Project are often a day late and a donut short. Donut Dog has appeared several times before, use the site’s search to look for “donut”. He’s a character from a random title generator used to help people come up with ideas for 24-hour Comic Book Day (another major holiday, in which deranged cartoonists attempt to create 24 pages of comics in 24 hours, without prior preparation). “Donut Dog Saves the Day” is not my finest hour (or 24 hours), but my drawings of him have improved since that exhausting night. Like all true superheroes, he looks good posing with the American flag. I did make one little adjustment, though, and I hope Congress gives it consideration.

Oh, and this is his first appearance in color. I think he’s manly enough to get away with the pink frosting.