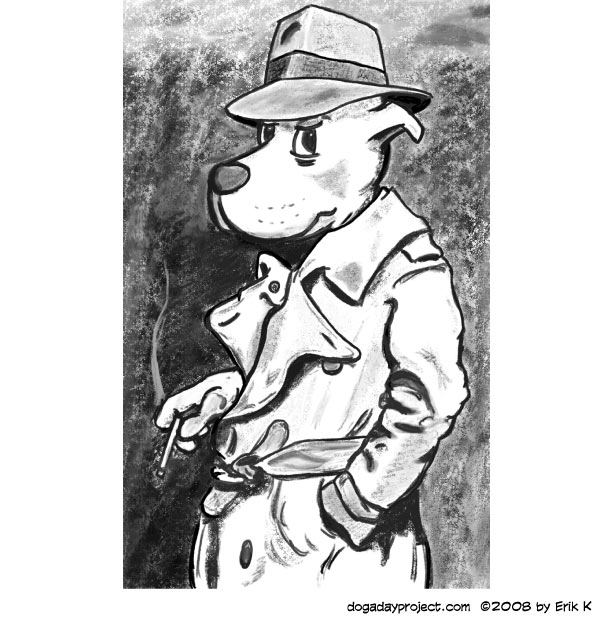 Not exactly a Father’s Day image, but this one was inspired by my father in a couple of ways. He wrote a some funny speculations on the future of air travel on his blog and mentioned the “A Dog a Day Project” in passing. A dog features in his piece, one in law enforcement. Then, in an email, he mentioned detective dogs in fedoras and trench coats (as well as more modern accoutrements to do with security personnel). Now, he put the fedora in Elliot Ness terms, but it seemed to me that the only way to go with that look was Bogart.

My dad introduced me early to Humphrey Bogart’s great films, Casablanca and The Maltese Falcon. From there I found To Have and To Have Not, possibly my favorite film of all time. So between the creative train of thought started by his blog and his introducing me to film noir, I created this shamus dog. The reference is a publicity shot from The Maltese Falcon, it seemed appropriate.

As for Father’s Day, I was struggling for a good idea. I kept thinking about cartoon dogs, and how you saw daddy dogs with a pup, while not often seeing a litter or a mother. There was Spike and his boy in the Tom & Jerry cartoons, and the immortal Auggie Doggie and Doggy Daddy, and probably others. Where was the mother? The rest of the litter? Who know what sadness lurked behind these comical characters. Death, divorce, loss, legal proceedings, accusations… one wonders how Auggie managed to be so chipper considering the tragedy that almost certainly shadowed his young life. To think, we laughed obliviously at the antics of these troubled souls.

Happy Father’s Day, all. Especially you, dear ol’ dad of mine.