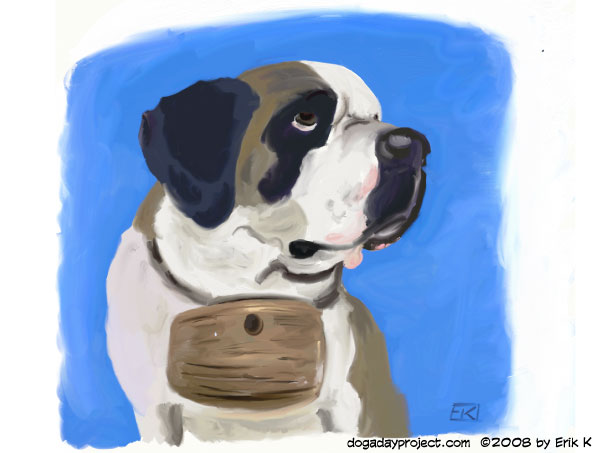 I read a review of a program called Artrage. It comes in a free version, and an incredibly cheap expanded version. I decided to give the free version a try, and here is the result. Though more limited than Painter, it was a pleasure to work with, and at $25 the pay version looks like a real bargain. I don’t know if I’d buy it, as I’m not sure it would replace Painter in any way for me. But still, I had a lot of fun learning it, and had the concepts down in minutes. It may prove to be a good tool to teach with in the future.

I think this is my first St. Bernard. Maggie and I have delighted in the fact that the male pick of the litter St. Bernard is traditionally named Barry. We just like that name. Perhaps part of the delight comes from an Eastenders character named Barry, a complete schlub and a comic character until he got pushed off a cliff. The actor appeared on the show Extras, and no one bothered to learn his real name and just called him Barry.

Now you’ve probably learned something and can go take a well-earned nap.

One Response to “Artrage St. Bernard”