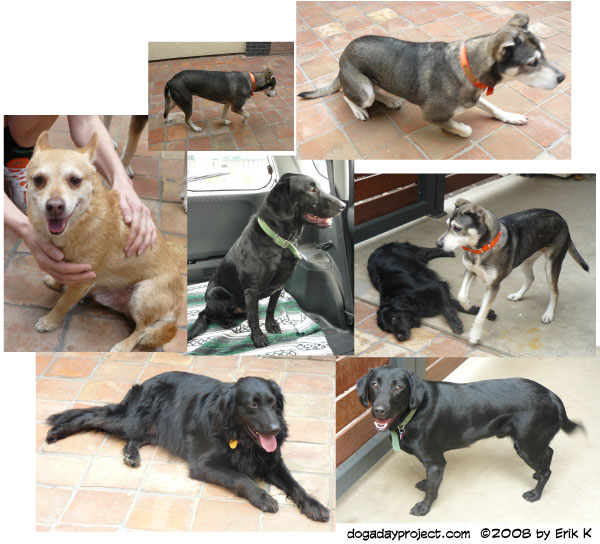 As we treasure our dog Storm, she wears a tag with her name and our contact details (which we must update to reflect our recent move). Because collars can be pulled off by branches and such, we’ve had her microchipped as well. That involves injecting a small microchip in the back of her neck, so that animal shelters can scan and identify her. All good things, because dogs get lost.

Today, while driving home, we came upon four dogs wandering down the middle of the road. All reasonably gentle and well-kept dogs, as you can see their pictures above. Two black retrievers named Aiden and Maya, a beautiful dog with nice markings and white nose and legs (I can’t figure out the breed) named Casey and a small yellow dog without tags or collar.

We managed to round them up, and with the help of another passerby, get them to our place and put them in our fenced courtyard. I ended up carrying the little guy the few blocks to our home as he seemed a bit aggressive with the others. We did our best to contact owners based on numbers and registrations, but we were only able to leave messages.

We took pictures to announce the lost dogs on Craigslist, and then delivered them to the local animal shelter. The owner of the two black dogs called as we arrived and saved herself the $80 per dog fee for recovery, and I have high hopes that Casey will be reconnected with his owner (he did have a phone number on his collar, but Maggie said the guy on the message at that number sounded like a bit of a jerk with a “leave a message or don’t, I don’t care” greeting his callers). If not, Casey is so beautiful that he’ll have no trouble being adopted. I’d be tempted. On a side note, Casey’s collar proclaimed “I’m not lost” on a metal plate that also included a phone number. That seems to make as much sense as putting “I’m not dead” on a cadaver’s toe tag. Of course the dog is bloody lost, and in deadly danger of paying with his life in the road or at the shelter.

It’s the little yellow guy I worry about. I had hoped that these dogs all belonged together, perhaps staying at the same place while owners were away on holiday and managing a daring escape. But no, the woman with the two retrievers had no clue as to the other dogs. With no tags, no clue to his identity, and probably no connection to Casey, this little guy will have to hope his owner cares enough to call the shelter and check for him. I don’t know if he’s a really strong candidate for adoption, though he was gentle enough around me.

This new neighborhood of ours if full of dogs. It is full of people who treat their dogs as outside dogs, and I fear that some may not be brought in even during the recent overnight freezes. Walking the neighborhood often involves being barked at from behind fences. So there are definitely many “old-school it’s just a dog” people around. But we had so many offers of help and concern as we blocked traffic rescuing these dogs, that it also made me feel very warm towards my new neighbors.

All of this took up much of my time, and prevented me from working on today’s planned dog. But as the distraction was dog-related, it seemed reasonable to treat this as my daily dog, especially as I had some nice pictures of these guys and a story to tell.

I felt very sad leaving two of them at Town Lake Animal Shelter, as the dogs there are euthanized if they stay too long without being claimed or adopted. I felt very sad as I filled out the white form for my captured stray when I realized that the people next to me filling out a blue form were abandoning a dog they no longer wanted (for what reason, I could not say). So I worry about these dogs. I worry about all the sweet-natured, loving dogs who are killed each week. I want to scream at people who don’t spay or neuter their dogs.

And for at least a little while, I’ll be holding even more tightly to Storm’s leash when we go for our walks, and keep closer to her when we visit the off-leash park. And I’ll hope that someone good-hearted would pick her up and call the number on her collar should the unthinkable happen